Ahead of Communicate 2020 our amazing volunteer writer Tom Bell is meeting with the speakers at this year’s conference to find out more about their work. This week Tom spoke to George Cook 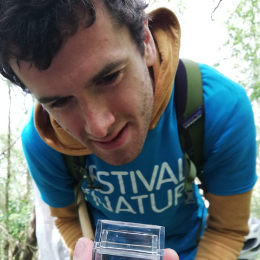 George Cook is a Communications and Engagement Officer for the Our Bright Future project, Avon Wildlife Trust

Our Bright Future is a partnership led by The Wildlife Trusts, which brings together the youth and environmental sectors. This £33 million programme funded by the National Lottery is formed of 31 projects across the UK. Each project is helping young people aged 11-24 gain vital skills and experience and improve their wellbeing. At the same time, they act as catalysts for delivering change for their local environment and community; whilst contributing to a greener economy.

George is arranging the Communicate+ session on Friday 27th November with young people aged 11-14. We’re handing this session over to them to curate to help us all understand how to work with this age group more effectively.

I started by asking George the question he’s put to the hundreds of young people at  Our Bright Future, the youth partnership initiative led by The Wildlife Trusts.

If you could change one thing for you and the environment, what would this be?

I guess it would be changing people’s relationship with the natural world. We need to get more connected to the world around us. I think we’re all a bit separate from that at the moment.

What was your ambition as a kid?

The first memory I have is wanting to be an actor. I was involved in my local youth theatre until I was about 16 or 17 but then thought, ‘not very cool’, (laughs) and stopped doing it. It’s definitely been useful when I’ve been presenting and teaching in various jobs.

What’s the best thing about your job?

Right now! I guess the best thing I’ve done recently is our young volunteer programme. We take young people aged between 14 and 24 out to our nature reserves and do practical conservation, train them up on skills and survey work and do all sorts of little projects.

We did one in August at Grow Wilder, our site at  Frenchay in Bristol. It’s like a wildlife gardening hub, a cross between allotments and nature reserves. We did wildflower ID, we built a wormery, they did a day at Folley Farm as well, cleared some nature trails which had been reclaimed by nature during lockdown! (laughs)

We had dinner around a camp fire and watched the badgers come out in the evening. We spent about half an hour waiting for these badgers to come out, all sat in silence. You’re worried, ‘are these teenagers hating this?’, sat in the cold waiting. But then the badgers appear and a couple of the young people hadn’t seen them before, so it’s nice to have those experiences. They come away all chatty and stuff.

Do you have a hero?

LeBron James (the great American basketball player) He’s got a great story, comes from absolute poverty and now he’s the face of basketball. I don’t think LeBron James has ever put a foot wrong. He’s never had any scandals, he’s opening up schools and doing a lot of good charity work. But then I don’t aspire to be like LeBron James, I’m not a six foot ten powerhouse.

What’s the last thing you really geeked out about?

Building a wormery this summer at Grow Wilder with our young volunteers.

When you make a worm compost bin, you have to buy these special worms called tiger worms that stay at the top of the soil. You can’t just use the ones in your garden. So I got this box of tiger worms in the post. I was like, ‘oh gosh they’re here!’ Darwin said ‘the most important animal in the world’ and they’ve just come through my letterbox!’ (laughs)

What do you listen to when you’re cooking dinner?

I am quite into folk music at the moment, but I’ve always got an audio book on the go. I am about half way through Brave New World by Aldous Huxley. Quite strange. Like a dystopian future novel.

Another, that’s quite topical I suppose, is Apocolypse Never (by Michael Shellenberger). ‘Why environmental alarmism hurts us all’. It’s basically this guy saying that the climate crisis might not be as a bad as everyone says in the media. I’m not sold but it’s very interesting hearing that different point of view.

What’s the best advice you’ve been given?

I remember going for a job at a national park. I didn’t get it and I was a bit upset. When I asked for feedback, they told me to volunteer with the RSPB.

Everyone always says you need to volunteer to get into this sort of work, so I signed up for an internship with the RSPB, threw myself into it, got really into birds and birding, spent a lot of time with the older volunteers and learnt a lot, met a lot of nice people. Looking back, I am very grateful I did that. The experience got me the jobs I’m doing now.

The only problem is that volunteering excludes large sections of the population who can’t afford or aren’t privileged enough to do unpaid voluntary work for weeks on end. I think it’s a reason why there’s lack of diversity in the sector. It’s a really difficult problem.

I went to a great conference last year run by Bird Girl ( the Race Equality in Nature conference organised by the young naturalist Mya-Rose Craig) and Chris Packham spoke at it.

He said, ‘it’s like we’re about to take our final stand on these environmental issues, and we’re doing it with only a third of the players on the pitch. We just not reaching all the communities that we need to. ‘

What advice would you give?

I am going to go for reading. How much would you pay for a one-to-one coaching session with your heroes. Books are that insight into our heroes.

Communicate is an annual environmental communication conference bringing together a diverse group of delegates each year to develop their skills, share best practice and debate latest issues in science communication, nature conservation and engaging people with the natural world.